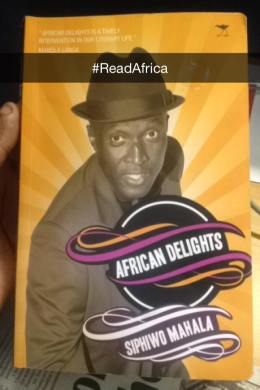 I bought this book last year, put it on my shelf and completely forgot about it. The other day after I finished reading Purple Hibiscus I was looking for something to read and decided to pick it up because of the cover.

Before I continue I must confess that I’m going to cheat and blog about this as part of the book challenge before I actually finish the book because I fell in love with it from the jump. The foreword to this book by Mandla Langa is the real reason for this post.

I love short stories because I feel that they have an element of African storytelling traditions in them. They are ngano on paper and African Delights so far is living up to my adoration for this form of literature.

The opening stories are a tribute to Can Themba a South African who in the 1950s was a journalist and writer for Drum Magazine, author of critically acclaimed short story The Suit which has been adapted into a play.

Mahala continues the story of The Suit adding the experiences of the other characters caught in the love triangle.

The internet is such a wonderful place that I was able to find the first two stories in African Delights, “The Suit Continued and “The Dress that fed the Suit”, count yourselves blessed.

First though, go through this foreword by Mandla Langa. It is quite lengthy but I’m sure once you get to the end of it you too will be as captivated as I am and want to read the rest African Delights.

To MAKE SENSE OF and to claim for our own Siphiwo
Mahala’s collection of short stories, a smorgasbord of
tasty titbits aptly named African Delights, we first need to
understand why Mahala felt compelled to draw us into
his imagined universe. It is a universe eloquently evoked
by the Uruguayan writer, Eduardo Galeano, in his essay
“In Defence of the Word”, which appears in his Days and
Nights of Love and War.

“One writes out of a need to communicate and to
commune with others, to denounce that which gives
pain and to share that which gives happiness. One
writes against one’s solitude and against the solitude
of others … One writes for the people whose luck
or misfortune one identifies with – the hungry, the
sleepless, the rebels and the wretched of the earth –
and the majority of them are illiterate.”

The notion of writing for the illiterate is probably self-
contradictory, since it raises the question of access to the
written symbols that encode words. Illiteracy, also, is a
darkness to which a vast majority of our people has been
subjected. During a visit to Beijing in 1998, this writer was
briefly separated from his group in Tiananmen Square.
Panicked, he couldn’t tell where he was or how to get to his hotel; all the sign age was in Chinese characters, and he didn’t
know the language. An illiterate person in South Africa is
that and more; his or her bewilderment is compounded by
the stigma that attaches itself to the unlettered, who are
usually dismissed as ignorant and uncivilised.

But, to write for the constituency of the downtrodden –
the wretched of the earth – can only be achieved through
a complete identification with the plight of people whom
the African-American poet Margaret Walker calls “all the
people/ all the faces/ all the Adams and Eves and their
countless generations”. This cannot be done, cannot be achieved if the writer fails to master the language that
strikes a chord with his or her readers.

The readers, in a country like South Africa, might not
necessarily need to know the alphabet; but they must be
gifted with the patience to listen to a story being read out.
As a form, the short story lends itself to being read out and
uses fewer formal elements than the novel. For instance,
it does not face the hurdles of developing those major
elements of fiction: character, plot, theme, point of view,
and so on.

Not too long ago, the South African media, especially
Radio 702, championed the cause of the short story. This
was in line with worldwide developments, notably in the
United Kingdom, where the National Short Story Week
boosted the celebration of the short story. The initiative is
an annual awareness event that directs the public and the
media to the short story and short story writers, publishers
and events. According to publicity material posted on
its website, the NSSW “is intended as a framework for
promoting literary events and publications at a national
and local level”.

Elsewhere, for instance, within the South Mrican
Department of Arts and Culture – which is where Siphiwo Mahala currently works – there has been a flurry of
activity to bolster interest around books, reading and
publishing. For instance, from 5 to 10 September 2011, the
South African Book Development Council and the DAC
co-hosted this country’s National Book Week.

Even in the age of electronic publishing, postings,
blogging and gadgetry, there is still something about
people converging around words and their physical
manifestation in books and journals. Even though society
is being programmed or enjoined, whether by economic or
social imperatives to enjoy solitary entertainment, nothing
takes the place of throngs huddled around the latest
literary offering, possibly by a young author, to marvel and
encourage (or, in cases of talents bypassed by fame and
fortune, to feed the green monster).

It is a moot point that talent eludes the majority
of any society and chooses a select minority. It is also
axiomatic that talent waxes brightest in instances where
its possessor strives for excellence. A country might have
a huge population with diverse experiences; that fact alone
does not necessarily translate into creative output any
more than the number of aspirant soccer players in any
one country produces an equivalent of, say, Brazil or the
Cameroun. For many years, Cuba and Hungary led the
world in cinema production despite their respective small
populations. It all resulted from the national character,
the political will of the leaders, and the cultural policies of
those countries. What this means, simply, for the purposes
of this foreword, is that a people might have a wonderful
store of historical experiences, the stuff of which stories
are made, but somehow fail to share those stories with the
rest of humanity. Their collective life experiences become
akin to Thomas Gray’s flower, born to blush unseen.

And that is a tragedy because, from Aesop’s fables, izinqanekwaru: or iintsomi that heightened our grasp of
humankind’s complex nature, tales, myths and legends
of Native American Indians or the Ijaw in Nigeria to
scriptures and songs, these narratives entertained societies
while giving them lessons of life. Who can forget the tales
of animals, which were our weekly entertainment, at a
time of this country’s ignorance, when radio was a vehicle
to broadcast poisonous state propaganda and television a
dreaded instrument of the devil?

For many years, the stories of this country – as well as
the stories from this country – were told in the same vein
as hunting stories told by hunters. There was censorship,
which proscribed any narrative that sought to invest
the majority of this country, black people, with human
qualities. This meant that, for the sake of survival and
for an unconscionable length of time, black people had to
collude in a lie about their unsuitability as members of the
human race; even more so, white people were also lied to
and grew up with a sense of superiority that was at odds
with reality. Everyone, therefore, the hunter and the lion,
was infantilised by the policies of an uninformed cabal.

There have been attempts by black writers – and if truth
be told, by some white writers – to tell the South African
story. And here, people will differ on what constitutes that
story, seeing that there have been narratives that come out
of this country that have absolutely nothing to do with the
heartbeat of this troubled country and its troubled people.
Black people, too, have written stories about South Africa
– a South Africa that exists, possibly, in those waxworks
studios where reasonable facsimiles of the human body are
manufactured. The form is there, but the soul is absent.
This is where artists create good-looking corpses.

The succession of literary movements largely mirrored
the political radicalisation of the downtrodden. There is a trajectory that traces forms of expression from the
supplications of the British colonial administration of
the 1900s, which saw the rise of talents such as Sol T
Plaatje; the so-called Drum school of writing reflected,
partly, the hardening of attitudes following mass
removals, Sharpeville and the armed struggle; the Black
Consciousness movement – itself having the Black Power
movement in the United States as a creative crucible – in
the 1970s. The literature of the 1980s up till the dawn of liberation, especially poetry, was an exhortation to action.

Siphiwo Mahala is clearly influenced by none other
than Can Thernba, who was the most brilliant chronicler
of the anxieties of the time covered by the Drum writers.
There were others, Eskia Mphahlele, Bloke Modisane,
Lewis Nkosi, Arthur Maimane, Nat Nakasa, to name a
few, who were the bright lights of the period. It was Can
Themba, perhaps, who most personified what he wrote: he
lived fast, drank hard and died relatively young, although
he didn’t quite pull off the trick of maintaining a good-
looking corpse, a la Willard Motley’s mordant dictum.

Now that we’ve cleared the undergrowth – to borrow
a phrase from a Constitutional Court judge -let’s get back
to business.

Mahala’s African Delights is a timely intervention in our
literary life. The book, consisting of twelve short stories
grouped in threes, explores the whole gamut of modern
South Mrican life. Most of the stories are told in the first
person, with the ones using the third-person point of view
tending to be longer, including the title story.

Even though Mahala tackles important themes that
relate to human development, triumphs and tears, he
maintains a distance that allows him to deploy humour
with devastating effect. The laughter is not at the expense of his characters; he explores rather than exploits the frailties of his protagonists. He laughs with rather than at
his characters.

This indulgent attitude to the weaknesses of his
characters – who are themselves victims of stronger external
forces – disappears completely when he turns his sharp wit
to the adventures of that class of human colloquially called
the tenderpreneur. These are the beneficiaries of black
economic empowerment tenders, who’ve not raised any
capital, but who are conspicuous consumers. They possess
cars the size of battleships and other accoutrements, such
as young trophy wives who, in turn, rob them blind both in
and out of the marital bed.

Mahala reflects the bewilderment of this class without mercy.

Contemporary South Africa, a state in flux, needs to
read these stories to understand how it is seen by some
of the sharpest commentators that this democracy has
produced. Millions of rands are wasted on focus groups
that strive to produce a blueprint, a roadmap, towards a
livable future for this country and its people. The pony-
tailed consultants need look no further because we have
in our midst prophets who give us a glimpse into what we
are. And, more chillingly, what we’re destined to become.

Eduardo Galeano might have been reading Mahala’s
book, reading between the lines, hearing what has been
left unexpressed. He wrote:

In these lands of young people … the tick-took of
the time bomb obliges those who rule to sleep with
one eye open.

I am part of the fellowship of writers that welcomes the
addition of African DeLightd to the body of South African
arts and letters.